Jerry Lewis: Will His Infamous ‘Lost’ Film Ever Be Seen?

Jerry Lewis: Will His Infamous ‘Lost’ Film Ever Be Seen?

The death of US comedy legend Jerry Lewis has prompted renewed interest in his notorious “lost film”, The Day the Clown Cried.

The unreleased movie follows a clown who is sent to a concentration camp and told to lead children to their deaths.

Lewis, who has died at the age of 91, gave his copy of the film to the US Library of Congress.

In 2015, the library confirmed it would be shown to scholars and members of the public – but not before June 2024.

Some, however, are not prepared to wait that long.

“Is it horrible that my first thought upon hearing about Jerry Lewis’s death is ‘now they can release The Day The Clown Cried’?” asked Paul DeBruler. 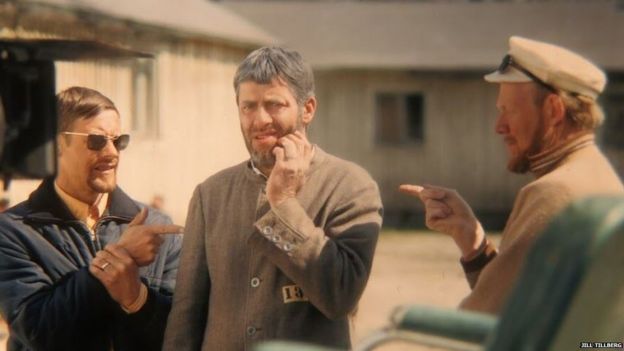 Lewis directed the 1972 film and played the leading role – a clown who is arrested in Nazi Germany for drunkenly defaming Hitler.

The character is then thrown into a concentration camp, where he is beaten and forced to lead children into gas chambers.

Lewis kept what is believed to be the only copy locked in a private vault before donating it to the Library of Congress.

US comedian Harry Shearer, one of only a handful of people known to have seen the film, said he was “stunned” by how bad it was.

In 1992, he said: “This movie is so drastically wrong, its pathos and its comedy are so wildly misplaced, that you could not, in your fantasy of what it might be like, improve on what it really is.”

The film’s release was initially blocked by co-writer Joan O’Brien, according to the Lewis biography King of Comedy by Shawn Levy.

Later, Lewis himself didn’t want the film to be shown, at least not in his lifetime, and rarely spoke about it.

On one of the few occasions he broke his silence, he said it was “bad, bad, bad” and would “never be seen”.

“I was ashamed of the work and I was grateful I had the power to contain it all and never let anyone see it,” he said in 2013.

“It could have been wonderful but I slipped up – I didn’t quite get it.”

“After I’m gone, who knows what’s going to happen? [But] I think I have the legalese necessary to keep it where it is.”

Last year, images from the film featured in a BBC documentary titled The Story of The Day the Clown Cried, and clips have emerged on YouTube.

Various purported versions of the script have been circulated online, inspiring both live readings and video re-enactments.

Lewis was famous around the world for his partnership with Dean Martin, his fund-raising for muscular dystrophy and his numerous hit comedies.

For all his attempts to keep it under wraps, though, his infamous Holocaust drama remains a source of continued fascination and debate.