‘Men in Black’ is Getting Another Sequel, and We Know when it’s Coming Out

‘Men in Black’ is Getting Another Sequel, and We Know when it’s Coming Out

“Here come the men in black men in black. They won’t let you remember…” But how could we forget this iconic ’90s sci-fi flick? In 1997 (and again in 2002 and 2012) Will Smith and Tommy Lee Jones kept the world safe from aliens in Men in Black, and there’s another sequel in the works.

Yes! Sony Pictures has reportedly fast-tracked a spinoff of its billion-dollar alien franchise, with the writers of Iron Man and Transformers: The Last Knight, Matt Holloway and Art Marcum, at the helm.

The upcoming Men in Black film is currently untitled, but has already received a release date: May 17th, 2019.

The movie will focus on new characters instead of the agents we know and love. And while Smith and Jones aren’t expected to reprise their roles, the writers intend to acknowledge and build upon the world they inhabited. Which makes sense, since technically Agents K and J might be retired from the black-clad secret organization at this point.

Can’t supervise extraterrestrial lifeforms living on Earth and protect humans if you can’t keep up, right?

Along with Holloway and Marcum, the MiB spinoff team includes producers Walter F. Parkes and Laurie MacDonald, and executive producer Steven Spielberg, all of whom are actively involved in the process of finding the right director for the film. 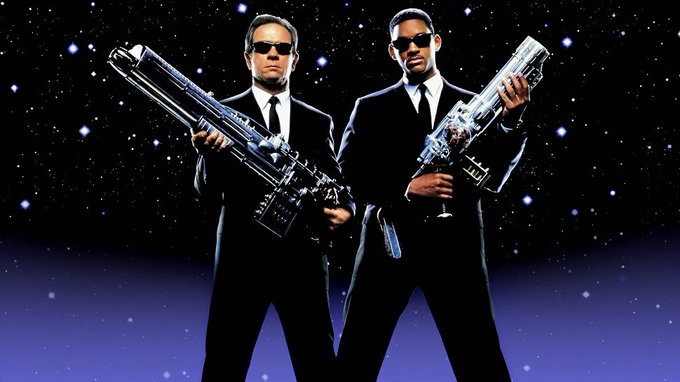 Parkes confirmed the Men in Black spinoff, telling Deadline, “It’s so rare to get to the end of the script and know you’re holding a movie in your hands, but Art and Matt have written a spinoff that somehow is true to the core of the MiB world, and yet expands the franchise to a fresh, new place.”

We initially expected a Men in Black/21 Jump Street mashup, with Channing Tatum and Jonah Hill’s characters donning the black suits. However, that idea remains in development, and the spinoff will come first. Sony will also be rebooting Charlie’s Angels, with Elizabeth Banks directing and Kristen Stewart and Lupita Nyong’o in talks. That’s another reboot we could definitely get on board with.

As usual, we’ll be sure to keep you posted on the happenings. We’re sure there will be tons of MiB news to hold us over until the movie’s official release in two years.