In a wildly confusing and rather dramatic turn of events – and one that’s arguably more entertaining than a new Sex and The City movie was ever going to be – Sex and the City 3 was happening, now it’s not, and the stars are now subtly shading each other on Twitter for the entire world to see.

Let’s back it up.

‘Sex and the City’ turns 20: How the HBO series revolutionized TV and dating forever

© New Line/Kobal/REX/Shutterstock Sex and The City The Movie – 2008A third Sex and the City movie was supposed to start filming in the next few weeks. However, just a few days ago, Sarah Jessica Parker revealed in an interview with E! that the project was shut down.

“I’m disappointed. We had this beautiful, funny, heartbreaking, joyful, very relatable script and story. It’s not just disappointing that we don’t get to tell the story and have that experience, but more so for that audience that has been so vocal in wanting another movie,” she told the news outlet.

© Getty Sarah Jessica Parker, Kim Cattrall, Cynthia Nixon and Kristin DavisThen came The Daily Mail – because when did the tabloids ever shy away from a salacious, unverified rumour? – who reported it was all Kim Cattrall’s fault. She’s a diva, you see.

“Sex and the City 3 is TORPEDOED by Kim Cattrall’s outrageous demands, just weeks before movie was set to start filming, leaving Sarah Jessica Parker and the rest of the girls in the lurch,” the headline yelled. Literally.

And this, my friends, is where the passive Twitter feud started.

Then came fellow SATC actor Willie Garson, who tweeted, “And that, is that. And sadly, the reasons are true. Period…Sarah Jessica Parker: ‘No Sex and The City 3’.” He then deleted it, because of course. But a-ha! Then he retweeted The Daily Mail article, because there’s nothing like hiding behind someone else’s words to really ram your point home.

Kristen Davis entered the fray, liked a bunch of tweets on Twitter from fans expressing their disappointment and even liked a tweet from Sia who offered to fill the shoes of Samantha to get the film off the ground. 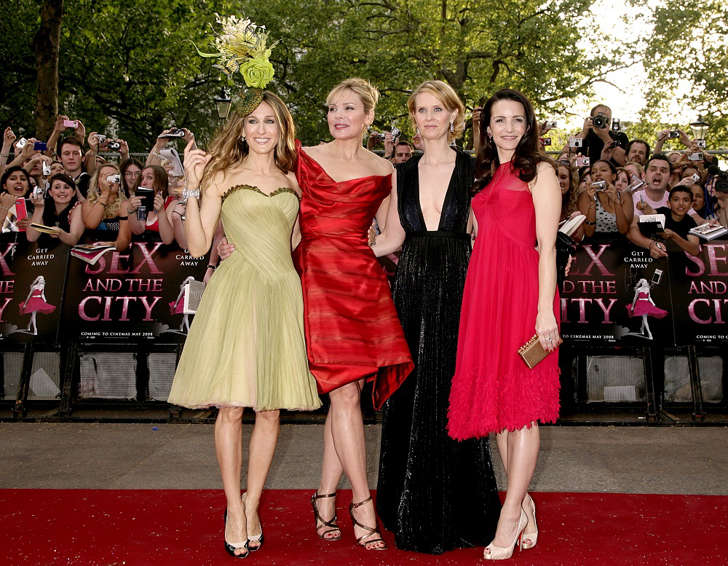 © Getty Sarah Jessica Parker, Kim Cattrall, Cynthia Nixon and Kristin DavisThen she wrote about her frustration on Instagram: “I wish that we could have made the final chapter, on our own terms, to complete the stories of our characters. It is deeply frustrating not to able to share that chapter (beautifully written by MPK) with all of you.

So we will just have our memories, but please know that all of the love and support for us through the years is felt by us and we are so grateful for all of you! SATC forever in our hearts.”

So, yeah. There’s that. No more Sex and The City for anyone. And at this stage, we have no idea who we should be pointing fingers at.