For 38 minutes, Tiger Woods made people believe his comeback was complete

For 38 minutes, Tiger Woods made people believe his comeback was complete

Is Tiger Woods ready to win again? We’re getting closer to finding out

For 38 minutes, it looked as though Tiger Woods was going to pull off the impossible.

Just three years after multiple back surgeries had made even getting out of bed agony, much less playing golf, here he was, leading the Open Championship at Carnoustie.

Then came a double bogey on the 11th, followed by a bogey on the 12th, which saw Woods lose his lead and his challenge for a 15th major unravel.

“I know it’s going to sting for a little bit here,” Woods said of his two hole collapse, but he remained philosophical. “Given where I was, to where I am now, I’m blessed.

“At the beginning of the year, if they’d said you’re playing the Open Championship I’d have said I would be very lucky to do that.”

Can Woods win another major?

Though he ultimately came up short, nobody in golf gets people talking quite like Woods.

Heat map, just after noon in the east when Tiger was making his charge. Shows the amount of people talking about Tiger Woods on Twitter. #jobsecurity pic.twitter.com/Bndzxv5lKX

The Golf Channel’s Tiger Tracker showed a heat map of Twitter users in the US talking about Woods as he was making his surge to the top of the leaderboard.

This was, after all, the first time Woods had led on the Sunday of a major since the 2009 PGA Championship.

He may not have won, but an eventual tie for sixth means Woods has now risen from world No. 1,199 to 50th, a ranking which sees him qualify for next month’s WGC Invitational.
Among the chatter, naturally, came the question: Can Woods win another major?

Tiger Woods probably isn’t going to win this event but so aren’t a lot of players who were really good. He was in the thick of it from start to finish. Most encouraging weekend of his comeback by far. If you don’t think he can win again you’re out of your mind. #BritishOpen

For some, though he didn’t go all the way in Scotland, his performance at Carnoustie indicated that he was back in major-contending form.

For others, it was an indication that he might even be able to go four better and equal Jack Nicklaus’ record of 18 major titles.

Since Woods’ return, even when dodgy form meant he wasn’t in contention for winning tournaments, he’s still remained a huge draw with golf fans following him everywhere on course.

But following Woods on Sunday did have its dangers for one spectator when an errant iron shot from the golfer hit him at the side of the fairway.

In case anyone cares, this was the video I was taking when I was struck by my DEAR FRIEND @TigerWoods pic.twitter.com/6tH1SCdTU8

It just so happened that Colin Hauck, a massive Woods fan, had his phone out and recorded the moment he was struck by the wayward approach shot.

Fortunately for 14-time major champion, the ricochet deflected the ball away from the thick bushes and gave him a more favorable lie in the rough.

To say thank you for the intervention, Woods gifted Hauck a signed glove, which was arguably worth the trouble of being hit on the head by a golf ball.

In the end, it was Francesco Molinari’s own dream finish which put an end to Woods’.

But while Woods has been accustomed to winning on golf’s biggest stage for more than two decades, Molinari’s victory was a reminder of just how far the Italian has come. 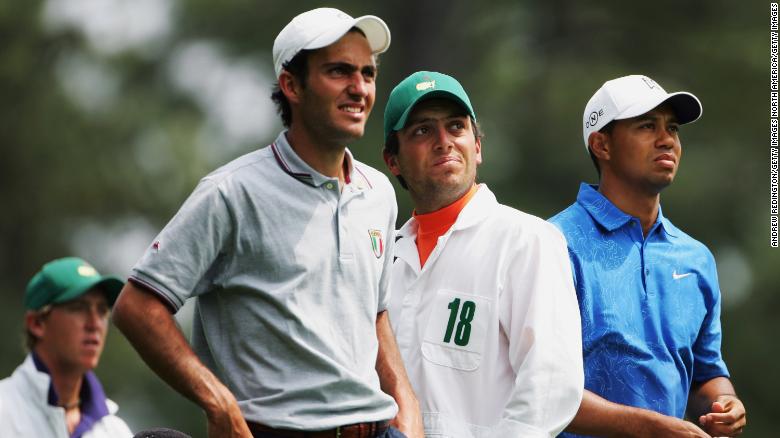 Tiger Woods and amateur Edoardo Molinari on the fourth tee during the second round of The Masters, 2006.

In 2006, 12 years prior to making history as Italy’s first major winner, Molinari was caddying for his older brother Edoardo, then an amateur, who was paired with Woods at the 2006 Masters.

On Sunday, 12 years later, Molinari was paired with Woods on the final day of a major and held off his charge to win the biggest title of his career.